to most a weed, to some a piece of art, and certainly one of God’s creations.

While getting some fresh air and looking for something to take a picture off before the sun would set for the day, I found this wonderful looking thistle getting ready to spread her seeds.

It is said that the basal leaves can be eaten raw or cooked. Native Americans ate the roots, which are said to best cooked and taste like oysters.

Maybe I will try that next season 🙂

Tragopogon dubius (yellow salsify, western salsify, western goat’s-beard, wild oysterplant, yellow goat’s beard, goat’s beard, goatsbeard, common salsify, salsify) is a species of salsify native to southern and central Europe and western Asia and found as far north and west as northern France. Although it has been reported from Kashmir and India, recent evidence suggests that specimens from these areas may be a different species. Western salsify has been introduced into North America where it has become widespread, being reported from all the continental United States except for a few in the far south-east, and all provinces of Canada except Newfoundland and the northern territories.

Like most salsifies, the western salsify grows as an annual or occasionally biennial forb, reaching a height of typically 20–60 cm but sometimes almost a metre. It grows typically in warm, sheltered spots with moist soil. Its yellow flower head is 4–6 cm in diameter and is likely to be seen in late spring or early summer. Buds are blue-green, tall, and tapered. The inflorescence opens early in the morning and often closes up by late afternoon. Later the plant forms a seed head that resembles that of the dandelions but is distinctly larger. The seeds themselves (known as achenes) are 2–4 cm long but featherweight, weighing about 8 mg each on average. There is some natural variation between the central and peripheral achenes in the seedhead, with the peripheral ones being generally darker and heavier, and having a higher concentration of phenolic compounds; this may enhance their survival potential.

Western salsify is quite similar to the generally commoner meadow salsify, T. pratensis, but the bracts which show behind the flower head, a distinctive feature of salsifies, are longer and more noticeable. Although not particularly closely related to meadow salsify or the common salsify or oyster plant (T. porrifolius), the western salsify hybridises readily with both, and in North America its hybrids have given rise to the new alloploid hybrid species T. mirus and T. miscellus.

Snapshots from the 2022 Pendleton Roundup

Native American History – It is time to tell the truth 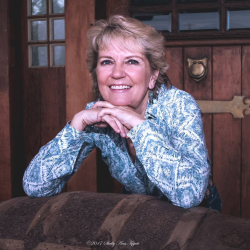 Angelika's photography work has been displayed on the front cover of Idaho Magazine (2022), the Nimiipuu Tribal Tribune, Cowboy Lifestyle Network (2021), Cowboys & Indians (2016 & 2018), and in various Oregon and Washington entertainment and vacation publications, Chief Joseph Days Rodeo Program and website (2012-2020), at Art Gallery Festivals, private businesses, as well as for display advertisement for many clients in and out of Wallowa County including the Wallowa County Chieftain (2003-2007). Between 2007 and 2009, Angelika worked in radio as the news and sports director for owners Lee and Carol Lee Perkins at KWVR Radio in Enterprise, Oregon. After the station was sold, she created Wallowa Valley Online, an independent online news magazine publishing and writing news and engaging in photojournalism. After ten years of Wallowa Valley Online, Angelika decided to concentrate on her professional photography, write more human interest stories, and volunteer at the Nez Perce Wallowa Homeland.

Regarding my writing: "As a grandchild of post-war Europe (ethnic ancestry Bohemian/Austrian/German) and former Army spouse, I have lived and visited many places across the globe. Wallowa County, Oregon, has been my home since 2002. I am the daughter of a mom whose country violently vanished post-WWII. Her family was forcefully removed from Bohemia in 1946 when she was only six years young and sent to West Germany in cattle wagons. Her life story has tremendously impacted my own and formed my views on humanity and, at times, the lack thereof.
My formal college education is in the nursing field and psychology, which finds itself in my work as a writer and photographer. I am a humanitarian by heart and soul." ~Angelika Ursula Dietrich

Scroll Up Scroll Up